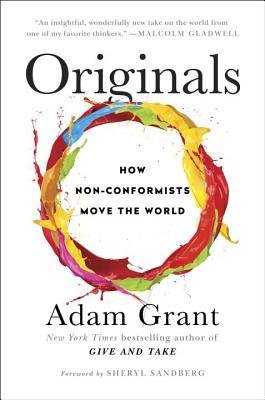 Another book with insights into the life and thoughts of ‘successful’ people this time wrapped in the brand of ‘Originals’. The book is in this league where you read them to understand how great thinkers think or great achievers achieve, but definitely not similar to the others previously published. He defines originals not only in the sense of innovation – the usual definition, but also in various domains and subdomains of real life. How one can create a whole new market with his/her innovation to how one can bring phenomenal change in a rigid institute/organization.

Book starts with an example of Warby Parker (too bad example to start the book with) and the life of its co-founders. The rational given by the author to claim the company as ‘originals’ is questionable but his analysis is good. Same goes with many other people/companies he has discussed in the book.

"There are two routes to achievement: conformity and originality. Conformity means following the crowd and originality is taking the road less traveled. Originality starts with creativity: generating a concept that is both novel and useful. But it doesn’t stop there. Originals are people who take the initiatives to make their visions a reality. The hallmark of originality is rejecting the default and exploring whether a better option exists. They question the status quo and then get into action to change that."

This is what Grant has termed creative destruction. The book is a simple discussion to understand how status quo was challenged in the history and what actions were taken. The first section of the book focused on managing the risks involved in generating, recognizing and voicing general ideas, the second section is focused on the question of scaling and how originality helps in scaling the ideas generated and the final section is on sustaining that idea.

He discussed some interesting things like how child prodigies are hindered by achievement motivation, they focus more on the paths already defined to achieve something and are driven away from originality. The structure of the society itself kills the innovation in them. Not denying the fact that they do become very successful in life, but not original. How Segway claimed to be “one of the most amazing piece of technology since the personal computer” by Steve Jobs failed miserably. He gave a very interesting analysis of how people could make a wrong judgement of the product. What was lacking during the Segway development was a proper feedback or survey to gauge the utility of the product. Segway was claimed to replace the means of daily transport and thus make cities pollution free. Instead, it became an alternative to walking and thus making people unhealthy.

Another useful insight was to focus on generating as many ideas as possible than to fixate on one that is not worthy. Sometimes we get involved in the idea so much that we tend to ignore the shortcomings of the idea. Generating lot of ideas gives the flexibility to move on from one to another. He talks about how important is position and power to speak up about something against the norms in a rigid organization. If you do not have position or power, chances are very low that your ideas will be heard. But that is not the end, there are ways to get heard, long tedious ways, you have to slowly infuse the idea amongst your peers and work your ways towards getting things done at the right time. There is not point rushing in – “ Fools rush in”. But delay has to be disciplined as well.

The highlight of the book for me was the second last chapter on “rethinking groupthink”. How groupthink could lead to complete demise of the organization to how to resolve this. Not only how important a devil’s advocate is in any organization but how to define and make them is also important. This is why a culturally diversity in any organization is so important. He discusses about three types of blueprints across the companies – professional, start and commitment. Professional blueprint focuses on hiring companies with required skill – tend to lose them as soon as they find another better option. Star blueprint looks for people who have the potential to become an asset to the company. The commitment blueprint looks to hire people who are committed to the cause of the company and therefore could be from any/diverse background. This type of blueprint is what keeps the company floating in the dire straits.

Overall book has good insights, new information and is worth reading.